Review of Under the Same Sky by Joseph Kim

I read this sad story after reading its review in World Magazine. A young man keeps on walking one day, a celebration day in North Korea, a day when the guards are not paying close attention. He walks so far that to go any further will lead him into China. His remaining family has been torn apart by the famine in North Korea, so he has no motivation to stay. But when he gets to China, the people who live in “rich homes” slam the door in his face. He only finds help after he listens to the advice to go to a building that has a cross on the top.

Joseph Kim is a strong survivor of an almost unbelievable tale. Little things that we take for granted here: namely food and freedom, are in high demand in the repressive regime that he defected from. Don’t read this book if you don’t want to know what the poor people of this world face daily while we live as kings and queens here in America, by comparison.

The subtitle is: From Starvation in North Korea to Salvation in America and on the front cover is a bowl with only few grains of rice outside it. Most of the book involves Joseph’s upbringing in North Korea. He started off with a secure family and ended up a filthy migrant (called Kkotjebi) who stole in order to survive. We all know that it is wrong to steal, but maybe we would do the same thing if we were in his shoes? It is something I don’t really like to think about. The saddest part of the story for me is when he talks about his sister, Bong Sook. I hope he finds her and that she can come to America one day.

When Kim left North Korea, he was in culture shock. By the time he came to America, even more was he astonished at the comparison between our two countries. He suffered a time of depression after leaving everything he knew for a strange land where he lives alone, but has since recovered. Joseph Kim is a bright and hard working young man and a college student in New York City.

This book is not a happy read, but it gives a dose of reality into what it was like to grow up during the time of famine in North Korea. I hope  God uses Joseph Kim’s story to enlighten others as to the plight of those who live in the “Hermit Kingdom,” where lack is suffered daily and to be a Christian is to be a criminal worthy of death. 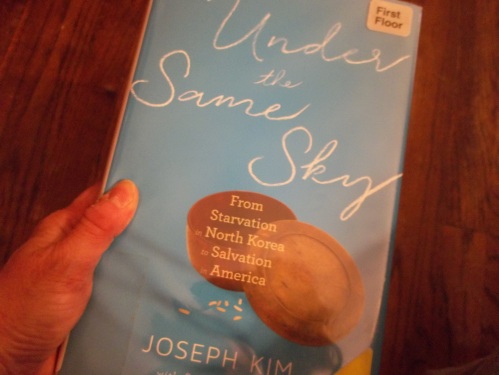